Beatnuts or Beat Kings? That is the question. 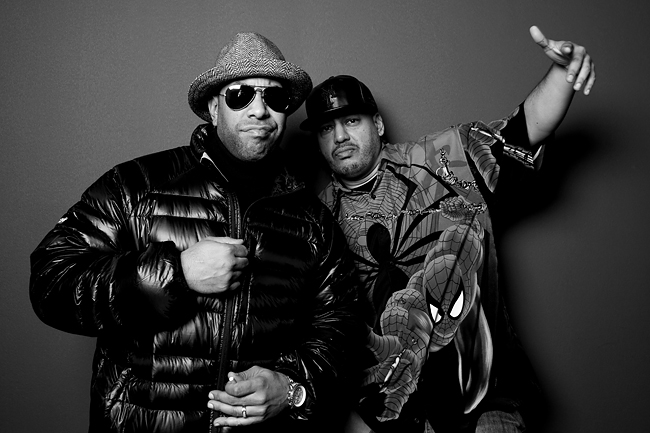 The Beatnuts call themselves „world famous“. Is it a matter of fact or over the top? According to their influence and collaborations it’s a matter of fact. They met Afrika Bambaataa*, are a peripherical member of the Native Tongue collective* and worked together with Big Punisher. Enough with the name dropping. In fact, they make ingenious beats with great jazz- and funk-samples. Maybe they should rename themselves „The Beat Kings“, how they called themselves in the beginning. By the way: They’re also dropping their new album „Planet of the Crates“.

The Beatnuts: So the interviewer is a girl. You aren’t a feminist or something? They aren’t nice to us…

DER ALBRECHT: No, I like you and I’m a fan. It isn’t easy for me to change my mood from crazy fan to a serious journalist, now. …Give me a try: How is the European tour so far?

The Beatnuts: Amazing. Last night we did a show with Masta Ace in Hamburg.

DER ALBRECHT: Did you go to the Kiez, where the red light district is?

The Beatnuts: Haha! Aight, here we go with the feminist questions.

DER ALBRECHT: Haha, normally you party on the Kiez, that’s what I meant, basically. Do you know in which city you are right now and have you ever been here?

The Beatnuts: Kiel is situated in the very north of Germany, almost in Denmark. We already played here once around 1994, but maybe you were still too young then.

DER ALBRECHT: Does the German Hip Hop scene differ from the American?

The Beatnuts: No, Hip Hop people are Hip Hop people all over the world. The only difference is the language. Germans got beats, they’re diggin‘ in the crates*like us, so we really like it. You can also be authentic, when you don’t come from New York, where it all began. It isn’t about the place, but about self expression.

DER ALBRECHT: When did you start Hip Hop?

The Beatnuts: That’s a difficult question because we were already doing it before they called it Hip Hop. Back in the days it was just „Rockin’“. We didn’t know what we were doing there in the street. Because of that names like „Rock Steady Crew“* and phrases like „Rockin‘ the house“ evoked. It was only called Hip Hop after The Sugarhill Gang made it commercial. We talk about the time in 1978, when we still were kids.

DER ALBRECHT: Can you imagine yourself as somebody else than a Hip Hop artist?

The Beatnuts: We never planned to become artists. We just loved making beats in the beginning. Somewhen it became an art form and you got paid for it. Suddenly it was a career. But it’s just regardless our life. We don’t care about the fame, we’re still normal people. We earned the respect we have, but it was hard work. For us it’s a blessing to do what we love.

DER ALBRECHT: What do you like most about being a Hip Hop artist?

The Beatnuts: The shows, the travelling, the experience. We love every part of it. Making beats is of course our favourite part. We lived that shit! We worked at Burger King and spent all the money we earned on records. Some other motherfuckers were living it, too. But somewhen they said „It’s time to get a real job.“ and they just left their dream. We’re doing this no matter what: famous, not famous, rich, poor. You do the things out of passion and you can’t think about the future. We were lucky, because we were prepared, when Hip Hop became an economic force.

DER ALBRECHT: Now, I’d like to talk about your music. My favourite song is „We got the Funk“ and I love the sample of Rachel Sweet’s It’s so different here in it. How did you find that sample?

The Beatnuts: All girls like that song. The cover looks nice, doesn’t it? We found that record in Texas in an old record store many years ago. We’re collecting records for so many years that we already developed an instinct for it. We look at the album cover, at the release year, at the record label and already process the sound of it then. We just know how specific the sound of pop music was back in the 50s, 60s and 70s. We’re just sensitive to the feeling that music carries. When you do sampling you should transcend genres. We can’t only buy jazz records, because we do Hip Hop. You can find your sound in everything.

DER ALBRECHT: How many records do you have?

The Beatnuts: Between the two of us we could open five vintage records stores with basement, 1st and 2nd floor. Our cribs are full of records – all in alphabetical and genre order. But we also have crates for soundtracks or one only for kids records. It’s a whole categorized library.

DER ALBRECHT: What do you think about digitalism?

The Beatnuts: We like the progress of technology, but the sound is not the same. The digitalism desensitizes you. It took us hours to find the jewels in the record store. It was hard work. Nowadays it isn’t appreciated anymore.

The Beatnuts: It isn’t stealing, when you clear it.* It really depends how you use it. When it’s a little break on an unknown record, it’s fine. We wouldn’t use a famous single. Our goal is to find the rarest groups and make something out of nothing. And even if we use something known, it won’t sound like the original at all. We take it, chop it and make it sound better. When the sample is recognizable, we clear it. For Watch out now and the Hijack-sample we did it of course.

DER ALBRECHT: Here you are. I always tell everybody: „No, the beat isn’t from Jennifer Lopez‘ song ‚Jenny from the Block‘, it’s from The Beatnuts!“ It annoys me.

The Beatnuts: We try not to get angry. She isn’t even in our league and it wasn’t her who did it. The Trackmasters produced it and just took our beat. We can’t do anything, it’s a sample. But they didn’t sample the original, they sampled us. Some people just do music for the wrong reason. They want to make money. We make records to get respect. Our man DJ Premier has a tattoo on his arm that says „Respect is the corner stone of success“. When you’re a biter*, you never gonna have respect, you know what I’m saying.

DER ALBRECHT: Are the origins of Hip Hop still important to you? And people like Gil Scott-Heron*, Kool DJ Herc*, Grandmaster Flash* and so on?

The Beatnuts: Ot course we appreciate them, but they didn’t invent it. Rhyming and the repetative rhythms come from Africa. The New York Hip Hop shit comes from Jamaica. Kool Herc is Jamaican and he brought that shit to the Bronx in New York. The big speakers in the parks, the grooves and the records that nobody knew. It’s black music. We’re also aware of our own roots – we’re Dominican and Colombian American. But in the end it isn’t important where you come from. It depends on the feeling you have for the music.

DER ALBRECHT: What can I expect from the concert tonight?

The Beatnuts: The DJ of Masta Ace said to us that he likes to play with us because we make the girls come to the concerts. It’s a funny thing, we don’t get that. We do hardcore stuff and not R’n’B or something. For us it isn’t about gender. It’s about our view on music and the sound we have. It touches the nerv, it appeals to the people, it gets deeper, it’s special. You’ll notice it. You know, normally „We got the Funk“ isn’t on the setlist, but since it’s your favourite song, we’re going to perform it tonight. We have to rehearse it now. You see, what you do to us? You make us work!

DER ALBRECHT: How cool, it makes me happy. Thank you very much for the interview.

Native Tongue collective: bands like Jungle Brothers, A Tribe Called Quest and De La Soul, who propagate positive-minded, intellectual lyrics and an eclectic use of samples

diggin‘ in the crates: to skim through record stores to find rare vinyls

clear a sample: to gain the permission to use a sample and pay a fee to the original artist

biting: to steal or copy a style, beat or dance move

Gil Scott-Heron: considered to be the innovator of melismatic speech song (R.I.P.!)